To some people doing research on cloned monkeys to help find cures for human diseases might seem perfectly acceptable. But to those opposed to doing medical experiments on intelligent, sentient beings, China’s cloned research monkeys present some major ethical problems.

According to the researchers the monkeys were cloned to serve as medical research subjects as they search for cures to gene-based medical diseases in humans.

–
Animals used to stand-in for humans
.

Animal testing and research involves people doing things to animals that we would not permit them to do to human subjects.

The World Medical Association’s Declaration of Helsinki indicates that in human subject research, the interests of the research subject should be considered paramount. No amount of possible societal benefit should trump the consideration we give for the consent and welfare of human subjects.

This obviously prevents all sorts of research from taking place – because even though results may be beneficial to humanity overall, some experiments would be harmful to the research subject.

The solution to this problem has been to shift this research to animals – given that many believe that animals have a lower moral standing than humans.

Human proxies: the closer to humans, the better

So animals are used as a proxy to try to assess what would happen to a human subject exposed to the same environment or condition.

Ideally the animal needs to be close to humans in the relevant health aspects that are being tested. Otherwise the results are likely to not tell us anything useful from the human perspective.

However, the closer to humans the subject is in a biological sense, the more likely the animal to also have a high moral status – perhaps even the same moral status as humans do.

This is because moral status is typically thought to be based on the capabilities something has, rather than its genetics. A number of different characteristics have been suggested as the root of moral status, such as sentience, consciousness, personhood, rationality and higher order reasoning. The closer an animal is to us, the more likely it also shares these traits with us. 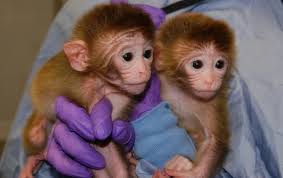 Primates are closer to us than other species in terms of their capacities. Even if we don’t hold that all primates hold the same moral status as humans, it seems clear that if any animal does have moral status, primates would be highly placed on the list. Legislation and practices around research have grown to reflect this.

Some countries – such as the Netherlands, New Zealand, the United Kingdom, Sweden, Germany and Austria – have legislation that recognises high moral status animals (great apes such as orangutans and chimpanzees, for example) from being used as research subjects. This has occurred because of work by organisations like the Great Ape Project and the Nonhuman Rights Project.

Despite this many non-human primates are still used in research, around 75,000 in the US in 2017 for example – most of whom are bred in captivity for this purpose.

The macaques edited and cloned in these new papers are an example of a primate that is still used a research model to explore human health.

The ethical problem of cloning and commodification
.

Commodification, the practice of taking something and making it “property”. It is making animals a ‘thing’ rather than a being.

Commodification is important psychologically because it helps with the othering that allows us to abuse and misuse. If something is an object rather than a subject, a “thing” rather than a “being”, it becomes easier to discount its welfare.

Commodities have no standing of their own; they are things we use and discard at will.

Of course research animals are already property. The vast majority are captive bred, and many of those animals are commercially created for use in research.

Cloning for research purposes might nonetheless increase the commodification of these animals by commercialising their production even further. When techniques are used to create animals with specific harmful characteristics to improve their usefulness as test subjects, this inherently increases the view of these animals as merely disposable objects.

Given that we recognise primates often have a high moral standing, it is likely that commodification will lead to the inappropriate treatment of these creatures.

Controversial cases – such as this relatively recent piece of research testing the effects of diesel fume exposure on monkeys and humans – provide a troubling window into what can occur when creatures are treated merely as a means to a scientific end rather than as beings in their own right. 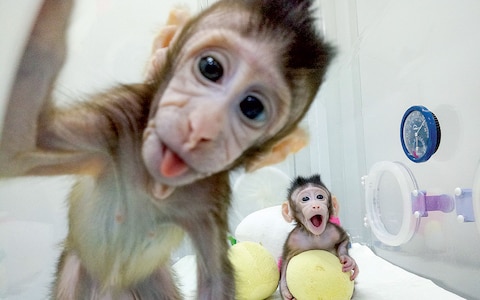 On a slippery slope

Commodifying creatures that are close to us in moral standing may well itself lead to a slippery slope. A word commonly used regarding commodification in the human context is “dehumanising”.

Once we are used to treating those creatures as a commodity, something merely to be used, destroyed and discarded if needed for scientific quality, it may be easier to treat fellow humans in that way too.