A new scientific study has revealed that wolves and domesticated pet dogs are actually a lot alike.  In fact, both pet dogs and wolves will work cooperatively alongside humans to solve a task.  The main difference?  While domesticated dogs will wait to take a cue from humans as to how to proceed, wolves are far more likely to use initiative and act on their own to problem-solve–even if it means stealing from the humans.

“…wolves tend to initiate behavior and take the lead, dogs are more likely to wait and see what the human partner does and follow that behavior.”

The takeaway: Modern day domesticated dogs do not differ that much from their wolf counterparts.  In fact the researchers found that dogs owe their cooperative nature to “the wolf within”.  What sets domesticated dogs apart from wolves is that during the course of domestication, those that were submissive to humans were selected for breeding, which makes them the better pet today. 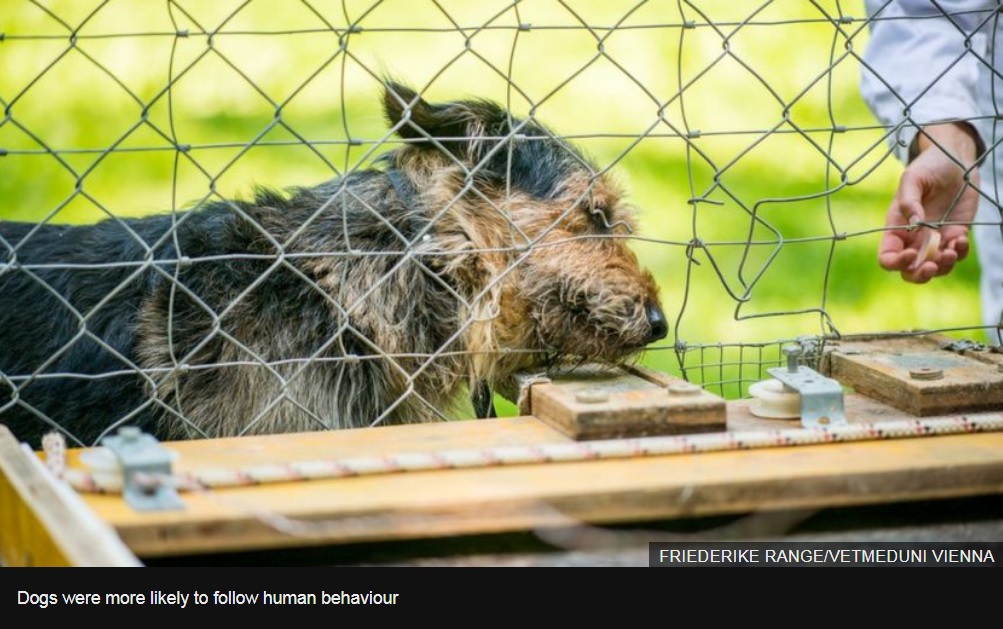 How did that domestication of certain wolves come about? About 30,000 years ago, wolves moved to the edges of human camps to scavenge for leftovers.  The subsequent “taming” process of domestication and selective breeding then slowly began to alter their behavior and genes and they eventually evolved into the dogs that we know today (followers, not initiators, of human-animal interactions).

Due to their convergent evolution, dogs have been suggested as a good model for the evolution of human social skills, such as tolerance and cooperativeness. However, recent studies have revealed that wolves (dogs’ closest undomesticated relatives) are more tolerant and cooperative with conspecifics than dogs. It is still possible, though, that selection during domestication enhanced cooperative inclinations specifically towards humans, predicting better cooperation with humans in dogs than in wolves. We tested this hypothesis by comparing similarly human-raised wolves and dogs when cooperating with a familiar human partner in a string-pulling task.

Both dogs and wolves were highly successful with the human partner, highlighting that dog-human cooperation could have evolved based on wolves’ social skills. However, wolves and dogs differed in how they cooperated with their human partners with wolves being more likely to initiate movement leading the interaction with humans, whereas dogs were more likely to wait for the human to initiate action and then follow. Accordingly, we propose that during the course of domestication, after an initial reduction in fear of humans, dogs were selected for increased submissive inclinations (Deferential Behaviour Hypothesis) in order to minimize conflicts over resources, to ensure safe co-habitation and co-working in a way that humans lead and dogs follow.