.
Fair Oaks Farms is a popular agritourism destination and provides daily tours for people to “explore our dairy farms for a fun-filled look at the life of a cow,” according to its website.
.
It also belongs to the company that produces fairlife milk products distributed by the Coca-Cola Company.
. 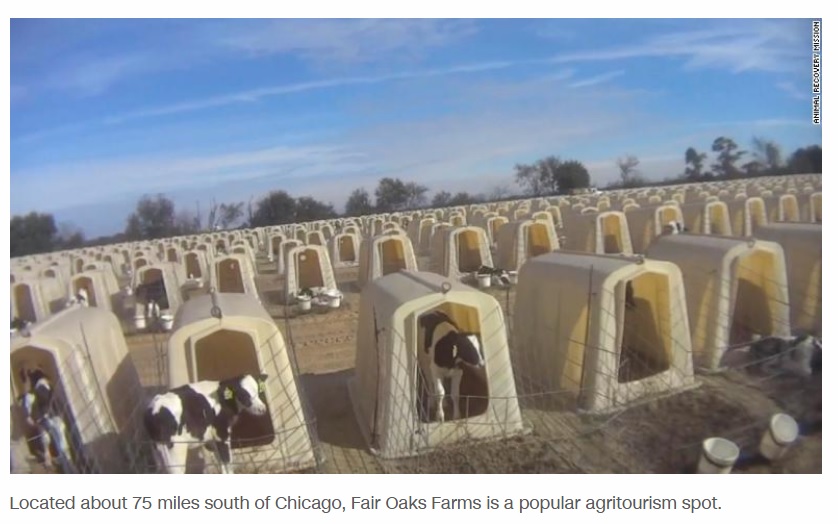 .
An Animal Recovery Mission (ARM) investigator who gained employment working with calves at Fair Oaks Farms captured graphic footage that visitors probably don’t glimpse on their tours:
.
ARM’s video depicts employees kicking, pushing and slamming to the ground newborn calves that did not nurse from the artificial rubber nipple during the feeding process.
.
Calves were deprived of adequate nutrition, and the video shows employees stabbing and hitting calves with steel rebars and branding irons, ARM said. In addition, employees would sit on the calves, which was often too much weight for the animals to bear.
.
Transportation of newborn calves was violent, ARM said. In the video, employees are seen throwing calves into the trailer or forcefully pushing them in.
.

WARNING: This video may be too disturbing for some viewers.

Law enforcement is investigating the allegations

Newton County Sheriff’s Office launched an independent investigation into allegations of animal cruelty. It said it has requested the names of the employees in the video and is looking for people who witnessed the animal cruelty and failed to report it. Newton County Prosecutor Jeff Drinski said he will most likely file charges against the perpetrators on Monday June 10 2019 once the former employees are located.
.

In a statement, fairlife said it has suspended milk deliveries from the dairy identified in the video.
.
Several supermarket chains are pulling fairlife products from its shelves, including Jewel-Osco, Family Express and Tony’s Fresh Market…Family Express, which operates convenience stores throughout Northwest and North Central Indiana, discontinued all fairlife products and picked up Organic Valley as its new milk products supplier.
.
Source

Animal Neglect and Abuse and Stray Animals in Indiana

A proposed bill will make animal cruelty a federal felony