We have published numerous study excerpts on the topic of plastic harming marine life.  Sadly, such studies seldom make it into the public eye. This latest study has managed to make a splash in the mainstream media however, and with any luck policymakers will be pressured to change the relationship consumers and manufacturers currently have with plastic.  Hint: Plastic bubble wrap, fast food and frozen food containers, beverage six-pack tie-rings, and so much more can and should be examined for viable alternatives.  Banning drinking straws is just not enough.

A new study suggests that ingesting even a single piece of plastic can be deadly for sea turtles.

Researchers found there was a one in five chance of death for a turtle who consumed just one item – rising to 50% for 14 pieces.

The research team also found that younger turtles were taking in far more plastic than adults. Around 23% of juveniles and 54% of post-hatchling turtles had ingested plastic compared to 16% of adults.

The authors say their research raises concerns over the long term survival of some turtle species.

The never ending surge of plastic into the world’s oceans is taking an increasing toll on iconic marine species.

While it has been relatively straightforward for researchers to document the threat to animals who become entangled in plastic and drown, determining the impact of consumed plastic is much harder.

The authors of the new study want to raise awareness among consumers and political leaders about the threat from plastic and to encourage creative solutions to the issue. One option may well be a plastic tax or deposit scheme. 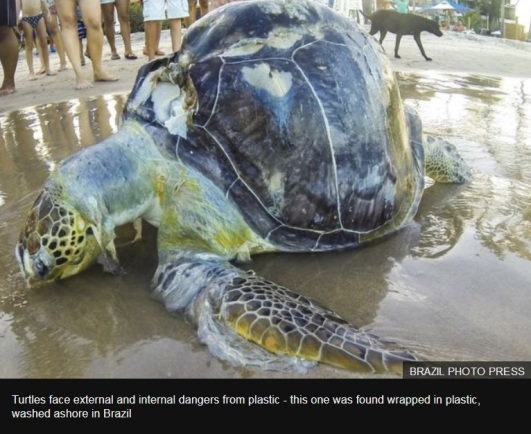 “Let’s rethink our relationship with plastic. Let’s put a true cost on plastic so they have a similar value to aluminium cans which we don’t find lost in the environment, they get picked up and they don’t get mismanaged and find their way out into the ocean.”  -Dr. Britta Denise Hardesty, Australia’s Commonwealth Scientific and Industrial Research Organisation (CSIRO)