A video of Marineland’s last surviving orca, Kiska, is renewing calls online for the marine mammal to be freed.  The video, shared on social media on July 16, 2021 by former Marineland employee and whistleblower Phil Demers, shows the orca moving slowly at the surface of the water and faintly moaning.  Kiska is one of the few remaining marine mammals still featured as an attraction at the Niagara Falls, Ontario theme park.

The moaning Kiska makes in the video sounds like the animal is suffering…”It’s a really heartbreaking situation.  It’s difficult to watch that video and feel anything but abject sympathy for this animal.”  -Camille Labchuk, executive director of national animal law advocacy organization Animal Justice

Kiska has been in captivity since she was captured in the waters of Iceland as a young calf in 1979. The orca has been in isolation, without any companions, at Marineland for the past 10 years after outliving all her tank mates, including her five calves.

“She’s probably the world’s loneliest orca because every single other orca in captivity at least has other whales if not orcas themselves.”

The video has also revitalized a two-year Change.org petition to #FreeKiska with an update asking Ontario Premier Doug Ford to move the orca to an “appropriate facility” such as a whale sanctuary, where “she can begin to acclimate to the wild and live a more natural and healthy life.”

Animal Justice has filed an enforcement complaint with provincial authorities requesting an investigation into whether Marineland is breaking the law by keeping Kiska in such conditions.

“In Ontario, it’s not just illegal to cause physical pain or suffering or distress to an animal, but psychological distress too, and when you have an animal in solitary confinement, it’s difficult to imagine that she’s not experiencing stress.”

Ontario’s provincial animal welfare services have the authority to issue charges and orders against Marineland, as well as seize animals.  However, moving Kiska is “unfortunately unlikely.”

The Ending the Captivity of Whales and Dolphins Act, which was passed in 2019, makes it illegal to keep any whales in captivity in Canada, except for the ones who are already in captivity.

Animal Justice is hopeful that Kiska may one day be moved to a whale sanctuary, with one currently being built in Nova Scotia. 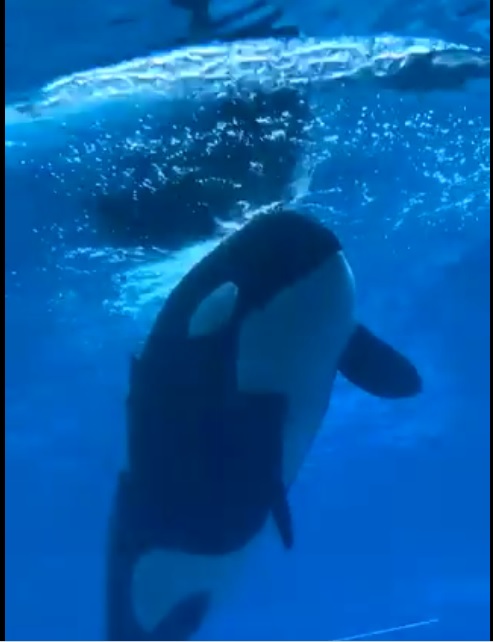